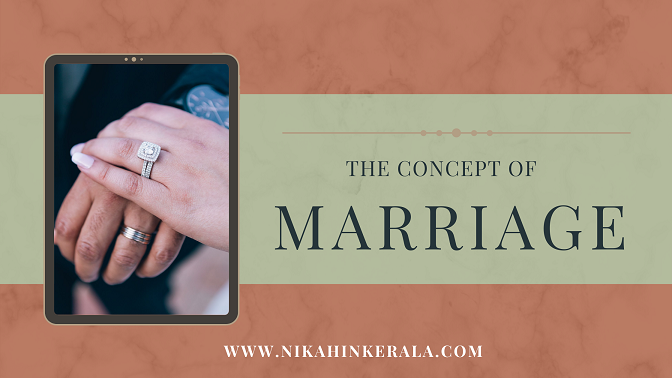 In Kerala, a Muslim marriage is described as a bond/commitment between a Muslim girl and a boy for marriage in Kerala. This bond is also strongly linked to devotion, patience, acceptance, support and harmony through the best Kerala Muslim Matrimony. In addition, starting a family signifies entering a new stage of social development, accepting new responsibilities which are often considered as society’s most critical institution. This article is purely a rethinking of the meaning and concept of marriage.

It is nothing but the state of being united. Marriage is an oath of being life partners in a consensual and contractual relationship recognized by law. When we think about marriage, a long lasting relationship is the foremost thing that comes to mind. Marriage is also one of the most important choices that someone makes in their life. Since we’ve decided to spend the rest of the life with that one person. When people decide to marry, they imagine starting a family, dedicating their lives to one another, and raising kids together. The circle of humankind is like that only.

As it is seen with other experiences as well, the experience of marriage can be successful or unsuccessful. The truth is that, there is no secret to a successful marriage. It is all about finding the person and enjoying all the differences and imperfections, thereby making your life smooth and fruitful. So, a successful relationship is something that two loving people are expected to make. As a result, it does not occur on a regular basis. In comparison to unmarried people, researchers conclude that married people are less lonely and happier.

Marriage is not a philosophical idea. Since these ideas will continue to evolve for all. However, there are certain vital values that are present in any marriage or relationship. Kids, communication, problem-solving, and factors are the topics in question. Children may be the most important problem here. Since many people believe that raising a child is a ‘tough task’. Others, on the other hand, are skeptical. However, one thing is certain: having children would alter the couple’s lives.

Another aspect of marriage is problem-solving, which requires the realization that you should live on your own every day. As a result, it’s important to work together to resolve any misunderstandings. One of the most important aspects of a marriage is communication. In a marriage, communication is also crucial. As a result, the couple should behave as though they are friends. There should be no ‘secrets’ between them, and no one should keep anything hidden from the other. As a result, all parties should do what makes them feel more at ease. It is not important to believe that marriage is complicated, causing you to be preoccupied and depressed all of the time.